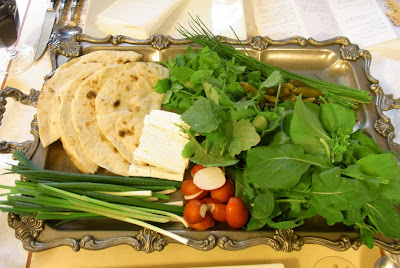 I was super excited about my most recent Persian cooking class, as it was fesenjaan again! After my success with Najmieh Batmanglij's recipe in February, and after seeing our instructor Reza cooking this version on the NHK program Asia Crossroads, I was more than ready for another plate of Iran's classic party dish. 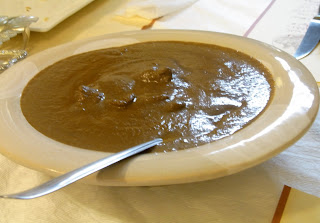 Reza's version, which somehow came to be dubbed "pomegranate curry" in Japanese, is certainly simpler than Najmieh khanom's. Onions and chicken are sauteed, and then spices and roughly chopped walnuts added. The chicken is removed, water added and the onion-nut mixture left to simmer for 20 min. It is then ground into a paste in a food processor or blender, making the sauce base. The chicken is returned, pomegranate paste and saffron water added and the lot left to simmer some more. The food processing bit seemed a bit radical to me, but certainly resulted in a smooth and dark sauce, so it looks like a winner.

None of my Japanese classmates had had fesenjaan before and were, I think, very pleasantly surprised by the combination of pomegranate and walnuts. In any event, there was a great deal of chatter about it round the table. Sour notes are not especially well represented in main dishes here, other than vinegared dishes like sushi, I suppose. No doubt an Iranian would probably have a similar reaction when presented with vinegared rice! 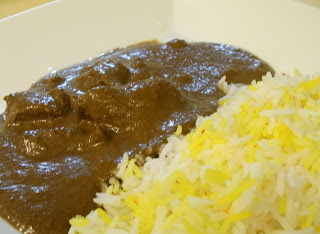 Speaking of rice, saffron rice was also on the menu, and the Iranian way with rice was another hot topic with my classmates. Japan is no stranger to rice, of course, but I can't think of any dish where boiling and draining the rice occurs. Grains that just hold together are preferred to separate grains, which would be much more difficult to corral with Japan's pointed chopsticks.

All of us had a surprise with our teacher's chosen method of cooking the nan for nan panir sabzi (bread, cheese and herbs), which was the appetizer for the evening. Flour tortillas (which being readily available, do duty as all kinds of flat breads) were toasted on a stove-top griller that's normally used for grilling fish here in Japan. Apparently it's the best way he's found of crisping up nan in Japan. There's a bit of a knack to getting the tortillas to puff up, but it works a treat. Must tell my dear Indian friend Sm next time he's in Japan! 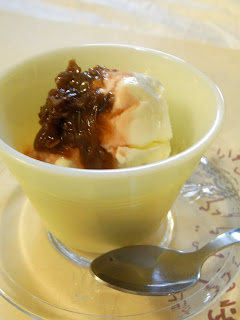 Our last treat for the evening was rose jam. How wonderful to know that you can make jam from dried rose petals (or even rose "tea"! The roses here (even in Yokohama, which claims the bloom as it's city floral emblem) don't have a lot of perfume, let alone taste...

The dried rose petals are soaked in water for 3 hours, so you need to plan a bit in advance. Other than that, it's just sugar, rosewater and lemon or lime juice. But oh, oh! What a flavour. Although we had it with ice cream, rose jam is equally delicious on pancakes, bread and stirred into yogurt.

In Iran, of course, fresh rose petals are used, and it seems that when they are in season you get them from the veggie shop. How great would that be??!

I love Persian food and love your blog and agree with your friends!!When are you coming to Rome?

Thanks for stopping by and your lovely comment. I love all the colors and flavours of the warm lands from north Africa to the Med, but have a real soft spot for Persian cooking. Must be the sourness :).

Rome? Who knows, maybe one day. How would a low-carber go??

can you tell me what the recipe is for the rose jam? im trying to find one online but there is nothing for one with dried petals...it would be much appreciated thanks :)

Thanks for stopping by.

I'll make the jam soon and post the recipe. I'm not sure if you can keep this jam, or if you should use it up immediately. Will experiment a bit and get back to you.

Dear blogger,
I found your blog page very fascinating. You definitely have the right attitude to write culinary book.
I m Persian who has been raised in Vancouver most of my life and haven't been back to Iran for a very long time.
My mother does still cook Persian dishes, but because we are from north of Iran where most of population are either descendants of Georgian or recently mixed with them,
Wehave acquired new recipes that does not match Persian food.
Such as Bosch which is a soup/stew in Georgia.
Or carrot khoresh with rice. You might want as well to look into koufgeh Tabrizi which is a rice and meat ball the size of a big baseball stuffed with nuts, eggs and dried fruits.
Cheers good luck

Hello Yasmin and thank you for your lovely words.

I am very interested in the connections between Persian and Georgian cuisine. For instance, could it be that walnuts in stews (eg fesenjaan) actually came from Georgia (where walnuts appear in cooking much more), rather than the other way round?? The sour tastes and copious use of herbs in the two cuisines is also striking. When I first read about Georgian food, I just knew there had to be a connection.

And I love kufte Tabrizi! I made Najmieh Batmanglij's version some years ago, and Reza taught us a southern Iran version made with rice a while back: http://saffronandlemons.blogspot.com/2010/10/persian-cooking-class-fig-salad-mini.html.

One day I hope to go back to Iran and hang out for a few months with some of the many brilliant homecooks to be found there : )