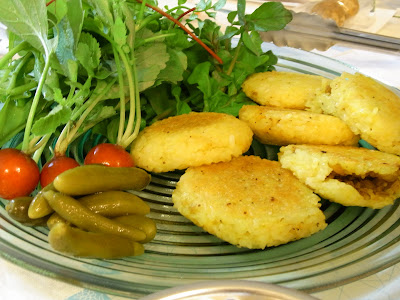 A serendipitous series of events led me to discover that a Persian cooking class is being held right here in Tokyo!

And even more exciting, the instructor, Reza Rahbar, is from down south in the Persian Gulf region of Iran. The Persian cookbooks in my collection do not cover this area of the country, and from the recipes Reza presented on the Ajiwai Kitchen segment of the NHK program Asia Crossroads in April, I knew I was in for something a bit different!

The class was held in a private apartment in swanky Aoyama, just a couple of stops by subway from my office. It was a very homey atmosphere, with a dining table set for 6 and a small hob where the cooking demonstration and hands-on cooking took place.

Reza-sensei was a charming host and very laid back in the kitchen, answering my barrage of questions as we went along.

The first dish we made were adorable kupeh fried rice cakes stuffed with a delicious filling of mince, onions, yellow split peas, sultanas, saffron and cinnamon (photo above). The aroma was very much like that of my favourite adas polo (rice with lentils and dried fruit). I wondered if they also eat adas polo where kupeh are from, and it seems they do. A variation on a theme, then.

The assembly of these little parcels is quite fiddly, but the resulting packets were like tah-dig sandwiches. Delicious. 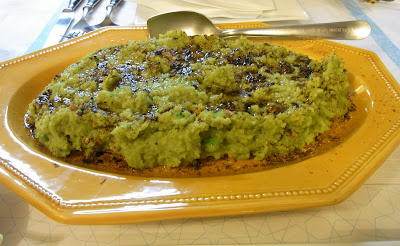 Next, we made sandali soltan ("the Sultan's seat"), a puree of garlic and turmeric-infused broad beans that was topped with ground dried lemons and sizzling olive oil, giving that unmistakable Persian tartness. I was surprised to know that this relative of the myriad purees, pastes and dips that feature heavily in non-Persian Middle Eastern meze, is considered a borani. I had thought that borani were all yogurt "salads". There you go!

With glasses of wine (at a small extra cost), we ate this with fresh chives and crackers, although it would probably have been lavash in Iran. Great stuff. 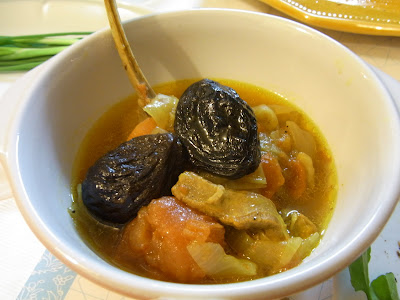 The other two dishes were a delectable stew of layered lamb, vegetables and prunes, which had been prepared in advance due to time constraints; and a dessert of dates stuffed with almonds and dusted with rosewater, coconut and cardamom that Reza prepared while we ate the first two courses, all washed down with Persian tea and saffron sugar crystals.

At the end of the meal, we were all happily sated and eager for the next session. 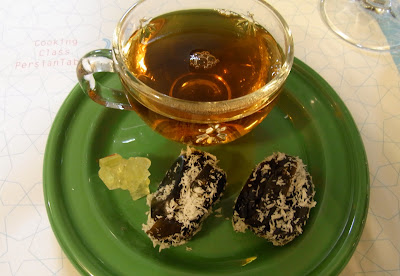 This was a trial lesson for me, but I think I was sold the moment I walked in the door to such a warm welcome, knowledgeable host, and the thoughtful offer of wine. A designer by trade, Reza had personalized our recipe sheets with beautiful artwork, and even presented us all with a thank you gift of two dried lemons in a presentation bag with a tag of his own design.

It was a lovely finishing touch to what had been a very enjoyable session of cooking with (new) friends. I signed up for more on the spot (g).
Posted by Saffron at Friday, April 23, 2010