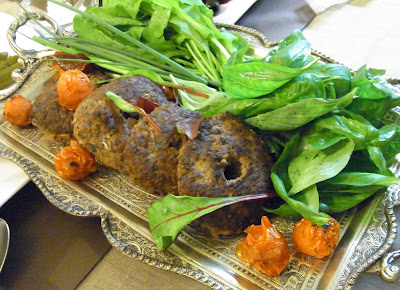 Christmas was fast approaching, so our dear Persian Table cooking class hosts, Reza and Tomoko-san, pulled out all the stops for a culinary red-fest. On the menu were donut-shaped spiced meat patties with grilled cherry tomatoes; a salad of beets, black olives and mint, the piece de resistance--jewelled rice--a dish whose reputation had grown to epic proportions in my mind; and for dessert, two varieties of quince preserves with ice cream.

To a Westerner, the word kebab often connotes marinated meats cooked on skewers or perhaps even veggies or fruit on a stick. But that is not the whole story (or even the actual story in the case of skewered fruit!). Across the Middle East, kebab can mean many things, the only common denominator being meat. Take Turkey, for instance. Kebab can be meat cooked just about any way, from sis (shish) kebab to the vertical spit roasted doner kebab and Iskendar kebab to testi kebab, a meat and veggie casserole baked in a clay pot. What I didn't know that the same ambiguity also reigns in Iran, and that extends even up to hamburger-like patties! 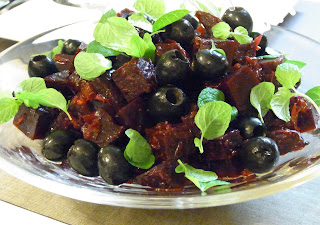 There are plenty of recipes for Shami (Syrian) kebabs in Googleland, and though the shape and size seems to vary from chef to chef and country to country, the common elements seem to be meat and some form of legume, often chickpeas, as in Reza's use of besan (gram or chickpea) flour. His Persian take on the dish is ring-shaped burgers well herbed and spiced with turmeric, parsley, tarragon, ginger, garlic and chilli. The chickpea flour and a little baking powder give the patties an airy texture.

The beet salad featured chunks of simmered beetroot with black olives in a garlic-lemon dressing, accented by fresh mint. A very unusual combination. Beets were previously not often seen in Japan, but they are becoming more readily available, now that they have been elevated to "superfood" status! 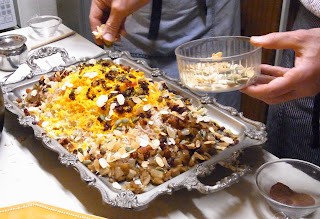 Jewelled rice is one of the pearls of Persian cooking. In photos, it always looks spectacular, a spread of basmati crowned with saffron-tinted rice, barberry rubies, pistachio emeralds and golden threads of orange zest. Reza's recipe adds almonds and pumpkin seeds for crunch, a collar of spiced onion squares, and a seductive sprinkling of rose petal powder, making the dish truly regal.

I was so impressed with the kebab and rice together, I decided on the spot to make this for my friends in Australia over Christmas/New Year, and smuggled some Iranian saffron into the country for that very purpose (g). 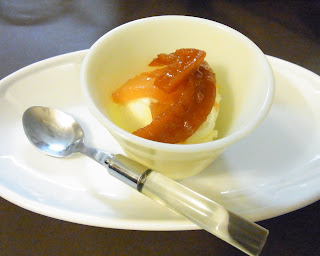 Quince is a quaint fruit often overlooked in the West, but prized in Japan and China for its throat soothing properties (of all things!). Reza and Tomoko-san had prepared two kinds of quince preserves, using two varieties of the fruit, which they served with ice-cream.

Thanks to one of our classmates who looked it up on her mobile phone, we now know that the Chinese variety of quince ("karin" in Japanese) has a smooth skin, whereas the central Asian variety (marmelo or "Western karin" in Japanese) has a bit of a fuzz. When prepared the same way, the flavour and texture of the two were actually quite different. Who knew there was so much going on in the world of quinces?!
Posted by Saffron at Monday, January 17, 2011

Where are recipies for these delicious Persian food?

Where are ther recipies

Sorry I missed your comments.

If not, we've just begun collaborating on a cookbook in English : )