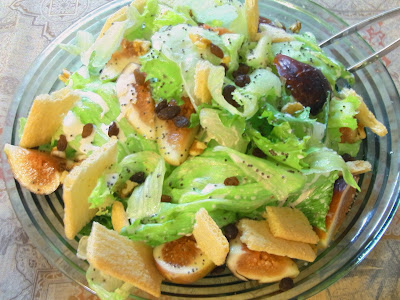 The last session of the current series of Persian cooking classes was to be in August, but was postponed until late September, as our dear instructors Reza and and his lovely wife Tomoko-san had a series of exhibitions of their artwork on around that time. In the intervening month, summer gave way to autumn and the planned watermelon salad starter made way for a more seasonal fig salad.

Lettuce leaves were tossed gently first with olive oil and then with a zesty dressing of Persian lime juice, yogurt, mayonnaise and honey. Reza has such a delicate hand when it comes to tossing salads, and my classmates and I commented on his precision and artistry. This simple salad was then garnished with quartered ripe figs, roughly broken crackers and lightly toasted black mustard seeds. It was a lovely starter, but would also be a nice weekend lunch dish. 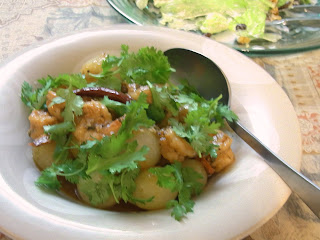 This was followed by a very exciting and exotic dish of miniature onions and prawns in a tamarind sauce. The prawns were marinated in fresh ginger and garlic (unusual in Persian cuisine), coriander leaves and a little black pepper and cayenne pepper for the little kick characteristic of cooking of the Persian Gulf area. The mini onions were fried in olive oil with a dried chilli and then simmered with tamarind water, before the marinated prawns were added at the end of the cooking time. I loved this dish but, as the tartness fiend I am, would maybe double up the tamarind when I make it myself. 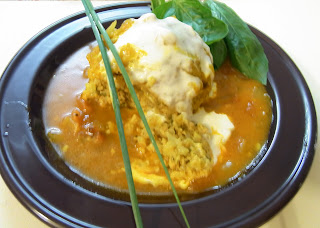 Next up was kufte berenj, or rice meatballs in a tomato sauce. Tennis ball sized, these are very impressive on the plate, but are also a complete meal in themselves, with rice, beans and a cube of cheese tucked into their orbs. Spiced with saffron, turmeric and dill, and topped with a mix of sour cream and yogurt (in place of liquid whey kashk, perhaps?) these are certainly not your average meatballs. 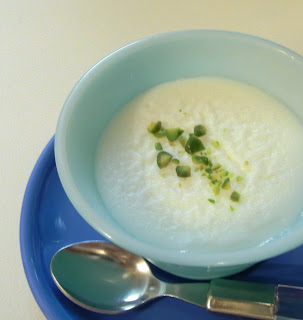 By this point we were all feeling quite sated, but there was still more to come! Ferni is the Persian take on that popular Middle Eastern dessert standby of rice pudding. Made with ground rice and milk, and scented with rose water, this pudding is usually served chilled. It's a very different beast from the British rice pudding of my childhood.

As usual, Reza and Tomoko-san had a little gift for everyone who participated in the class. This time it was a little atomizer of rose water.

Although it was the last session of this round of lessons, I'm really looking forward to the next invitation to Reza and Tomoko's "Persian Dining Table". It is clear that these lessons are a labour of love for the two, and their warmth and generosity make these lessons very different from those at other schools. Then again, the combination of Persian and Japanese hospitality was always going to be hard to beat! 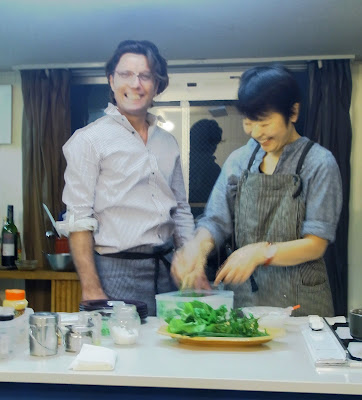 Reza and Tomoko in action in the homey studio kitchen

Greetings form Finland. I have red your bolog during one year, somewhat regularly, and enjoyed your colourful cookings and spicy recipies. Keep on going, this is delightful, only difficulty is to find the right ingredients here in Finland.

I've not been posting as regularly these days as I would like, but hopefully I'll be able to get back to it soon.

I must get round to trying Finnish food some time, too. Tess Kiros writes so beautifully about Finnish people and food in Falling Cloudberries.

we do a version of the ferni (which we call pirini) flavoured with ground cinnamon and jasmine water.

That sounds divine. I've not come across jasmine water before, but you've piqued my interest.