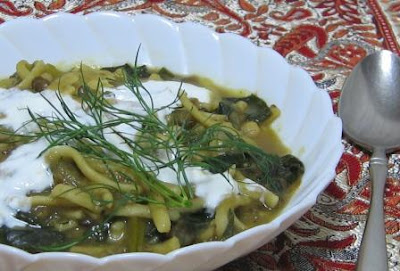 There is, it seems, some controversy over the role of this filling, fresh-tasting soup in the Persian New Year celebration. On the one hand, my favourite source of wisdom on all Iranian culinary things, Najmieh Batmanglij, calls it an essential part of the No Ruz spread. Meanwhile, my dear Iranian friend M says it is really just a snack, and that fish and rice dishes are the celebration's main event.

Well, I'm not going to argue the point with an Iranian, so I'll just straddle the line, and say that it is a dish traditionally eating by some Iranians at this time of the year, and leave it at that (g).

Chock full of beans and herbs, this contains, as my dear Turkish friend Se put it, "a week's nutrition in one bowl." It certainly packs a punch in terms of flavour but, in fact, it only contains a tiny amount of spice, and turmeric, at that. The secret's all in the onions, garlic and fresh herbs.

The original recipe is (of course(g)) from Najmieh khanom's New Food of Life. I made it exactly to specification last year, but reckoned there might be a bit much spinach in it for my liking. I also thought I could speed things up a bit with the pressure cooker. Even still, you'll want to start this a couple of hours in advance of when you plan to eat it. It's another one of those Slow Food Sunday meals, then.

Just a word about the name. Aash is a kind of thick, ingredient dense Iranian soup. Reshte is noodles. The noodles, as we learn in New Food of Life, "represent the choice of paths among the many that life spreads out before us. Eating [the] tangled strands is like unraveling the Gordian knot of life's infinite possibilities in order to pick out the best." The noodles bring good luck and fortune, apparently, and aside from No Ruz, are also eaten when embarking on other new endeavours for good luck.

Interestingly, noodles are also eaten at the New Year (Dec 31/Jan 1) in Japan, in the hope that their length will bring long life to the eater. I have to say that Japanese toshi-koshi soba ("year-crossing" noodles) are far simpler to prepare than aash-e reshte, but I rather like making this dish in the early spring as well. You can never have too much New Year's luck, after all (g).

You can read more about No Ruz, and even find another of Najmieh khanom's recipes here. Since fabulous food ideas and recipes are often to be found on the NPR site, I will also add the link to my the web hangouts.

1. Heat 2 tbsp oil in a large pressure cooker and saute the onions and garlic over medium heat. Add salt, pepper and turmeric. Add white beans and chickpeas and saute for a few minutes. Pour in 8 cups water and bring to boil, skim the froth as it forms. Put on the lid and bring to pressure, then cook on low pressure for 15 minutes (or simmer for 45 minutes in a regular pot).

2. Add lentils and beef bone stock. Bring to pressure again, and cook on low pressure for another 15 minutes (or simmer for 55 minutes). Check whether the beans are done

3. Add the noodles, chopped spring onions, dill, parsley and spinach. Simmer, stirring from time to time until the noodles are cooked (in Iran, they would be well past al dente). Add salt and pepper, and extra water if the aash is too thick.

4. Stir in the whey (or sour cream, vinegar or yogurt), saving a dollop for the garnish, and mix well with a wooden spoon.

5. To prepare the garnish (nana dagh), brown the onion and garlic in oil in a non-stick frying pan. Remove from the heat, add the turmeric and the crushed mint flakes and mix well.

6. Pour into bowls and garnish with the mint mixture and a dollop of whey (or yogurt).