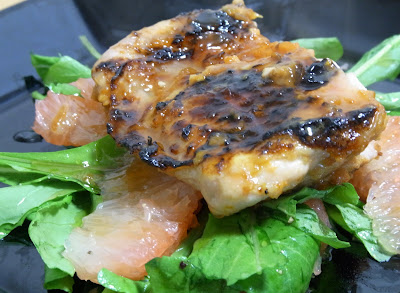 The weather's been pretty miserable in Tokyo this February. Clouds, rain, snow! Dull weather always gives me the blahs, and that sometimes that affects the weekly menus I cobble up before doing the weekly shop.

I usually try to limit myself to one cook book when planning the meals for a week. It keeps the cook book clutter to a minimum (g). But I wasn't getting the right vibe from the book I'd chosen for the week. Not enough vavoom. You really need vavoom when the weather's miserable. So it just had to be Ottolenghi: The Cookbook.

Not all of the recipes in Ottolenghi are weeknight friendly, it has to be said. It is, after all, a restaurant cook book. You would probably want to be a bit dedicated (do I hear you say obsessed?!) to attempt this when you don't have a few hours spare. Luckily, February 11 was a national holiday in Japan. Unfortunately, it was also the day that Iran's Green Movement was to gate-crash the hardliners' own revolution anniversary party! I was glued to the computer, with BBC Worldwide playing in the background. Other than making the harissa paste and slathering the chicken in the marinade in the morning (the night before would have been even better!), I had to rush at this like it was a weeknight dinner in order to get back to the action in Iran.

But it was well worth it. This has vavoom and then some! A real harissa marinade (also excellent as a dip; I'll be making more of this very soon!), peppery rocket, mild pink grapefruit and a grapefruit-lemon-honey sauce (lip-smackingly fabulous and very much to be recommended!).

I have a spice grinder, which makes powderising the spice seeds a breeze. You could probably get away with using pre-ground spices, but only if they're really fresh. You'll want to toast them for a shorter time, in that case. Just until they start smelling fragrant. My little grinder cost about 3,000 yen (around US$30) and I wouldn't part with it now.

Since my chilli-averse Young Man was going to have this, I scaled the chilli way back and doubled the coriander, cumin and caraway seeds in the harissa. The original recipe is for 1/4 tsp of each seed, if you want to revert to that.

I used yellow pepper in this, having used up the red in another dish. The tomato puree covered that up very nicely, though. I also substituted honey for the maple syrup. Delicious, either way, I'd say!

Oh, and don't you just love the description of segmenting a grapefruit in this recipe! Or am I sounding a bit too "recent convert" to you...?

2 Place a dry frying pan on a low heat and lightly toast the coriander, cumin and caraway seeds for 2 min. You should be able to smell the aromas of the spices. Transfer them to a pestle and mortar and grind to a powder.

3 Heat the olive oil in a frying pan, add the onion, garlic, and fresh and dried chillies and fry until they turn a dark, smoky colour. Blitz together all the marinade ingredients except the yogurt in a food processor or blender; you will have a pure harissa paste.

4 To marinate the chicken, mix the paste with the yogurt and use your hands to rub it all over the chicken thighs. Layer them in a plastic container, seal and refrigerate overnight.

5 The next day, take each grapefruit and use a small, sharp knife to slice off the top and tail. Now cut down its sides, following its natural lines, to remove the skin and white pith. Over a small bowl, cut in between the membranes to remove the individual segments. Squeeze any remaining juice into a bowl and keep to make up the 150 ml juice required for the sauce.

6 Preheat the oven to 220 degrees C. Lay out the marinated chicken pieces, spaced well apart, on a large baking tray and place in the hot oven. After 5 min, reduce the oven temperature to 180 degrees C and cook for another 12-15 min, until the chicken is almost cooked. Now place the chicken under a hot grill to give it extra colour and cook it through completely.

7 Meanwhile, place all the sauce ingredients in a small pan and bring to a light simmer. Simmer for about 20 min, or until reduced to a third.

8 To serve, toss the rocket and grapefruit segments with the olive oil, salt and pepper, Pile in the centre of 4 serving plates, put the warm chicken on top and drizzle about a tablespoonful of the sauce over each portion.